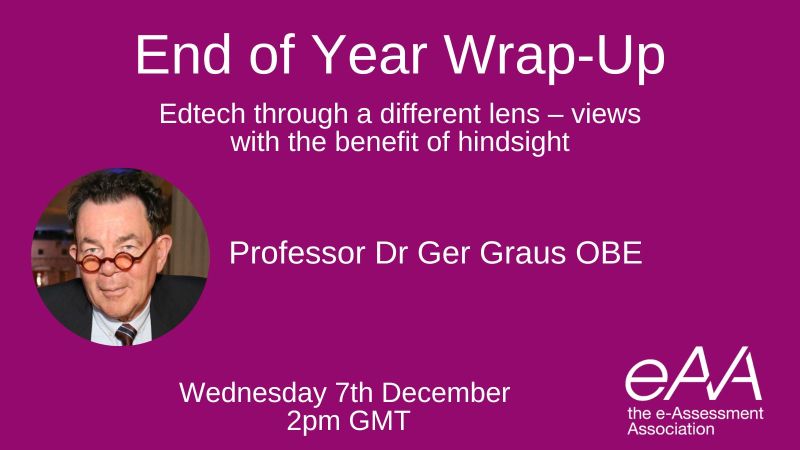 During this end of year wrap up, eAA CEO Matt Wingfield will be joined by Professor Dr Ger Graus OBE, in a fascinating discussion on the topic of Edtech through a different lens – views with the benefit of hindsight.

Dr Graus will touch on developments in the EdTech world, including hybrid and immerse learning, assessment 2030, how we can get to know our children better through measuring what we value, and wonders what it means for us all. He also asks “What’s new?”

Professor Dr Ger Graus OBE is a renowned figure in the field of education. He was KidZania’s first Global Education Director and founding CEO of the Children’s University. In 2019, Ger became a Visiting Professor at the National Research University, Moscow, Russia. He is also a Board Director at Hello Genius, and chairs the Advisory Boards at Kabuni, UK, and Twin Science, Turkey. Ger moved to the United Kingdom in 1983 where he began his teaching career, later becoming a Senior Inspector, and Education Director.

Dr Graus is a member of Bett’s Global Education Council; DIDAC India’s Advisory Board; Junior Achievement’s Worldwide Global Council; chairs the Beaconhouse School System’s Advisory Board, Pakistan; advises the Fondazione Reggio Children, Italy; and has been invited to help shape the future of education in Dubai as a member of the Dubai Future Councils.

In the 2014 Queen’s Birthday Honours List Ger Graus was made an Honorary Officer of the Most Excellent Order of the British Empire (OBE) for services to children.