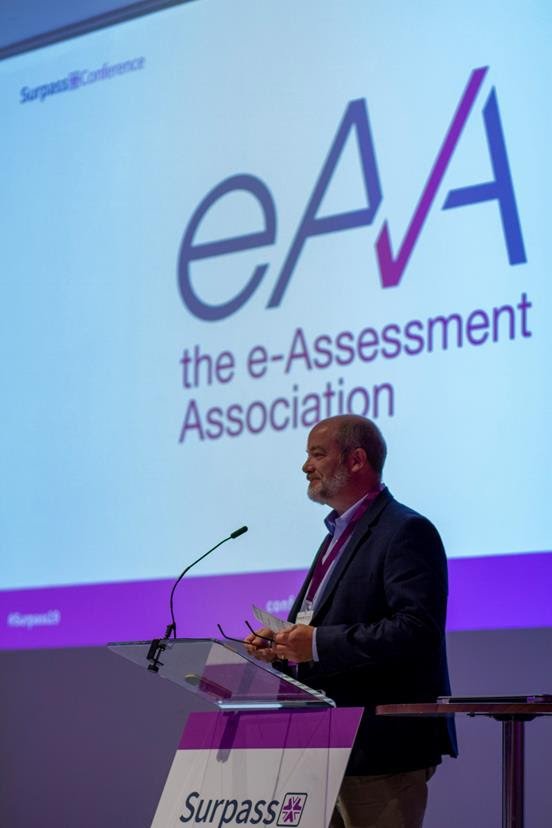 This month, I was able to attend the Surpass Conference; it’s the first time I’ve managed to get to the event myself, and it didn’t disappoint. The range of presentations and workshops on offer gave an insight into the work of the Community as advocates for e-assessment, despite some of the challenges being faced from policymakers and regulators.

It’s an event for the Surpass Community, but it’s certainly not all just about the Surpass e-assessment platform. Guest speakers this year included Olly Newton from the Edge Foundation, and Ben Whitaker from EduFuturists, who brought some of the challenges within the sector right to the forefront. This year, some of the common themes throughout the conference included:

Keynote speaker Olly Newton, asked ‘is it time for assessment 4.0?’ An increase in skills shortage vacancies suggests that young learners aren’t being sufficiently prepared for work in the twenty-first century. Data shows that employers are placing less emphasis on traditional examinations, and increasingly seeing value in essential transferable skills.

Olly suggested that whilst we don’t know exactly what the future holds for the world of work, we must plan for multiple scenarios, and prepare learners in the best way possible for the real-world. It was inspiring to hear about some schools who are already leading the way, including London-based School21 (https://www.school21.org.uk/) who place an emphasis on project-based learning and learning in real-world settings. Students spend time within real businesses each week to deliver real projects gaining those sought-after skills.

EduFuturist Ben Whitaker echoed these thoughts by looking to the year 2032 – the year in which his young daughter turns 18. Ben questioned whether what’s happening in education now is adequately preparing young leaners for the future, suggesting that it’s not just time and money that’s the issue; technology is increasingly being introduced in the classroom, yet knowledge is still being assessed via the traditional exam hall. More curiously, he also pointed out that we continue to favour assessing knowledge recall, rather than exploring opportunities to assess learners on how they apply knowledge – a skill that many learners will need in the modern workplace.

‘On-screen assessment will shortly touch the life of every learner in this country’ Ken Boston, QCA Chief Executive, 2004

The above quote was referenced in several presentations this year. There was recognition from the Community that there are a number of reasons that 15 years on, this is still not the case.

Dave Mellor and Rachel Teale from AQA discussed the challenges particularly facing General Qualifications. Recent reforms from the Department for Education resulted in huge time and costs (running to several million pounds) associated with developing new qualifications, delivered on paper because of the barriers still facing on-screen delivery for such large-scale qualifications. Both AQA and Ben acknowledged the counter-intuitive processes still being used, which involves the scanning of handwritten (and printing and scanning of typed) responses, for digital marking, and questioned why the whole process can’t be digitised from the start. They key barrier it seems, is for the policymakers and regulators to rethink their definition of an exam.

However, we also heard from Gavin Busuttil-Reynaud, Director of AlphaPlus and eAA Board Member, who provided an update on the personalised assessments being undertaken with primary school children in Wales, one of the first projects that simply could not have happened without the technology. This revolutionary way of testing provides students with a learning journey and feedback on how to progress as opposed to a score. A 96% completion rate matches that of paper tests and it has been well-received by young learners. Successful implementation of such a large-scale on-screen testing programme demonstrates just what can be achieved.

As ever, innovation was a key topic, and we heard from several organisations who are utilising technology to improve the whole education and assessment experience. NCFE CACHE spoke about their PregnancyVue product which uses VR to give learners an immersive experience of a topic that is becoming increasingly difficult to teach. Implementing technology in a way that everyone can connect with has generated more engagement from learners, backed up with more traditional methods.

However, there’s still a ‘paper culture’ ingrained that is yet to be overcome. We heard of teachers who are fearful of the use of technology, perhaps down to their own lack of confidence in it, or that their students are more skilled with it than they are. But, it’s important that as a community, we continue to make the best use of the technology available to us to give learners the opportunities the deserve.
Interestingly, we were also reminded not to make assumptions about the technical competency of our learners. Paul Eeles from the Skills and Education Group used the example of the MOT annual assessment which was moved on-screen to meet the needs of regulator. With most learners in this space over the age of 50, the technical capabilities outside of the context of their job were not there, creating unexpected challenges in the delivery of on-screen assessments with no option to handwrite. This case study clashed with what we were hearing about our young learners, who are often given no option but to handwrite despite typing being their usual way of working.

Community spirit was evident over these two days, and despite acknowledging the various challenges in e-assessment, and the uncertainty around what the future holds for the jobs market and its implications on learning and assessment, there was a clear hunger to drive forward change and use the technology available to assess learners in a way that reflects the real-world.

We left the conference with the feeling that as Community, we have the education system in our hands. By changing the end-point, and with the support of policy makers and regulators, the process of learning will change, which creates a unique opportunity for our Community. Innovation in assessment will have a ripple effect and drive forward changes in the education process.

“You guys have got an amazing opportunity because if you change and adapt the way the assessment works… you will be causing ripple effects back into everything else.” – Olly Newton