Virtual Learning Environments – Running or limping into the future? 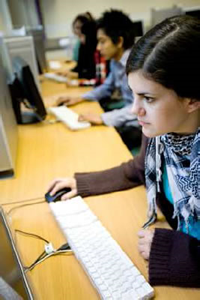 Virtual Learning Environments (VLEs) have become widespread in primary, secondary, tertiary/FE sectors as well as in higher education. Their use in workplace education and training is catching up fast. Yet, the impact of VLEs is not yet clear. VLE use ranges from being somewhere to store resources – the term ‘repository’ is often used as a criticism of VLEs, to being used as an interactive multi-media learning and assessment tool. So what makes the difference? What determines whether a shiny new VLE, installed at the expense of preciously guarded capital budgets, will be worth its cost? The key success factors include:

Some of the factors are interlinked, but putting in place all of the key factors has proved to be a real challenge in many institutions. Familiar issues are that a VLE is used merely as somewhere to archive resources, and that within any institution the use of a VLE may be determined by the enthusiasm, or otherwise, of individual teaching staff. If SMT don’t have the willingness of their teaching staff, then integration of the VLE into everyday teaching will be too fragmented to be called a success, and so teaching staff have to see the benefits of using such a system. Whilst VLE use may be promoted by senior management as important policy for an institution, a lack of understanding of how to use a VLE by those senior managers themselves means that they struggle to enforce its effective use.

A report in FENews.co.uk (March 2014) highlights that ‘five years after an Ofsted report said that many VLE systems were still on the cottage industry scale, some are stagnating and of limited value’.  A quick look through recent (2013-14) Ofsted inspection reports shows that school inspections tend not to mention VLE use. VLEs get more frequent mentions in college reports with such comments as:

‘The VLE contains useful information to help develop learners’ knowledge and understanding, but it is not used as an interactive learning tool in all lessons.’ (Ofsted report for South Staffordshire College, April 2013)

In April 2014, Ofsted published case studies (from 2013) that Ofsted themselves summarise with the comment that ‘the better virtual learning environments seem to be the result of inspired staff, and that even in those institutions, which have strong virtual learning environments, coverage is not comprehensive’. Ofsted include extracts from earlier inspections of colleges and training providers (2010-12) to demonstrate that they are taking an interest in VLEs and comment on inconsistency of use and content not being complete or up to date.

So, Ofsted is already evaluating the use of VLEs, at least to some extent. In recognition however that there may be a skills issue amongst inspectors, the Department for BIS stated in response to the Further Education Learning Technology Action Group (June 2014):

‘Ofsted inspectors will be provided with clearer guidance on how to judge and report on the effective use of technology to enhance learning in addition to continued training of inspectors to keep them ‘current’. This is a key priority for Ofsted and will enable inspectors to identify good practice and evaluate the effectiveness of deployed learning technologies’.

BIS say that this will include training for inspectors.

There are a number of factors that may hinder the development of a VLE within an institution:

The costs of a commercial VLE package can be high. The supposedly free open-source options can also add costs once third-party plugins are added. JISC have produced an interesting article on the development by West Cheshire College of their virtual learning environment using the open source WordPress. Although the decision was cost-driven, it demonstrates that there are alternatives to commercial packages, and that the key to success in developing a cost-effective VLE could be the enthusiasm of the people involved in developing and using it.

It is often assumed that all learners are digital natives, already comfortable with the use of immersive digital content.  Teaching staff working in FE or workplace education might not see this in such simple terms. Even in a mainstream FE college, there are a minority but often a significant number of learners that could never be described as digital natives. Many young people have experienced a fragmented learning experience in ICT through their school years, and many do not participate in the stereotypical teenager activities of immersing themselves in Facebook, Twitter, Instagram, Pinterest or one of the stream of similar newcomers.

Faced with a class of vocational students with a mix of qualifications, skills, and motivations, it should not be a surprise to find that a number of those students are resistant to using technology in their learning programme. Simply getting their attention for long enough to become engaged with online content is often the challenge, and further use depends on exciting multi-media content that is constantly evolving. This need for on-going development is a major challenge for teaching staff, whose annual workloads may only afford them this development time in the relative down-time of the summer months, leading to the content never been fully up to date and topical. Neither will it ever have the same ‘always-connected’ dynamic qualities of social media sites, with their pinging of updates and new messages, and learners will always see the VLE as work or study related rather than enjoying it as a means of learning and connecting with their peers.

The trade unions are cautious of too rapid an introduction of VLEs and alternative teaching approaches, citing concerns over workload issues because of administrative or developmental changes. Staff themselves are likely to have concerns about how it will change the way they work, and whether they will be able to cope with the skills demand. Some staff will appreciate the learning benefits and embrace what a VLE has to offer, even if that means extra work for a while, as the concept of interactive learning and using rich media content will excite them. Others will need convincing that technology-based learning is an improvement on them teaching face-to-face, and the concept of blended learning may still be relatively new to them.

VLE-based assessment may involve the use of quizzes or tests at regular intervals as a means of formative assessment. The summative assessment box is often ticked by using the VLE to allow the submission of assignment work through a drop-box, although unless tools are used to allow the annotation and return of work then this is little better than email. Test tools should ideally allow a range of question types, for example true/false, fill in the blank, multiple choice, ordering, matching etc, however this will depend on the system used and possibly the option purchased with that system. In reality, use of such quizzes will often rely on multiple choice only, and not necessarily well-designed ones at that as staff opt for what is perceived as the simplest one to set up. Experience in FE has shown that many do not use any form of assessment at all. Other tools such as blogs, discussion groups and wikis, to encourage interaction, support peer learning and reinforce deep learning are all valuable facilities, but ones that are not often used, particularly in the under-18 sectors.

So where does that leave the future of VLEs? What can be done to prevent VLEs being only a repository and what will be the drivers for change? To rely on the enthusiasm of individual staff will never provide more than sporadic and inconsistent progress unless time and money are provided to support training and development. Additional funding seems unlikely however, particularly in post-16 education where funding is shrinking. Ofsted say that they support developments in technology use, and no doubt the expectations of VLEs being considered during inspections will encourage senior management to move the VLE development up their agenda a little. However, the face-to-face classroom activities such as active and differentiated learning, behaviour management and ensuring each learner progresses dominate the attention of Ofsted, as shown by recent reports and this author’s own experience. The use of a good VLE could support these aspects of learning, but the reliance on technology to do this may still be seen as risky by some management teams. It could be seen that using a VLE to demonstrate good teaching and learning may not be as safe as having an enthusiastic teacher standing in front of a class backed up by a good lesson plan. It may be that there isn’t yet the trust in technology to allow a VLE to play a frontline role in teaching, and instead it is only allowed a supporting role. There are examples of excellent and innovative practice, but this needs to be more widespread. Until the majority of teachers genuinely value the role of a VLE in providing interactive multi-media based learning and formative assessment, and not just somewhere to refer to missed notes, then VLE development will stagger forward rather than breaking into a steady jog.