Analysis: Should pupils be able use their own computers in the exam hall? 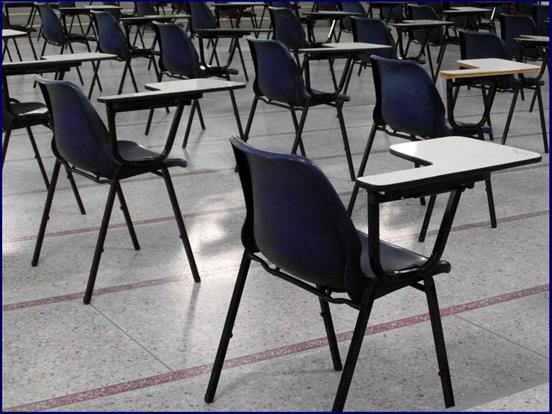 Should students be allowed to do exams on their own laptops and tablets? Or would it distort results and cause unfairness?

When asked to picture public examinations, most people will imagine a cavernous hall, with students sat at rows and rows of desks beavering away at questions using pen and paper.

But has pen and paper had its day – and should we be letting pupils do their exams on their own laptops and tablet?

One teacher thinks so. Caron Downes, a classics teacher at St Peter’s School in York, is an evangelist for integrating technology into assessment. She set out her pitch for students to take their own devices into exams at a Westminster Education Forum event in London today.

Downes – who has also worked as a marker – can’t understand why pen and paper still holds sway in exams at a time when every other area has been opened up to technology.

“To prepare for an exam, a pupil can sit down and type their notes, carry out their research online, collaborate on an essay plan with other pupils or with their teacher, they can complete online tests, they can write and edit their essays,” she says. “All of that is typed.”

Written exam papers fail to prepare students for a future in which they will overwhelmingly work on and with computers and other devices, she believes.

“Everything now is building up to this changing world. And yet [the exam room] hasn’t changed…we will tell them to leave their tech at the door.”

Under current regulations, pupils are allowed to type their answers out in exams. But they have to prove this is their “normal way of working” and do it on a pre-prepared, secure school laptop.

However, Downes says that pupils who would prefer to type their answers often baulk at this option. For example, they might not be comfortable with the school’s antiquated exam laptop because they do most of their work on a tablet.

“You get out one of the exam laptops, which has been living in the cupboard for 10 years, you cannot imagine the look of horror on that poor child’s face,” she says. “[The pupil says] ‘Actually, I’ll just find a pen – it’s OK’, because they’re so horrified by the idea of something they’ve not used.”

While some teachers might worry about greater potential for cheating if pupils are allowed to bring in their own devices, Downes points out that programmes already exist that allow devices to be locked down so all the pupil can do is type.

However, other people are wary about more technology penetrating the exam hall.

Nicole Hodge, an exam officer at Wellington College, says: “Every year I have an absolute nightmare with a flurry of people wanting to use computers in their exams because they say it’s the normal way of working.

“We cannot physically have 200 pupils doing their GCSE English on a computer, printing it off, etc.”

And those tasked with delivering and overseeing exams are worried about the implications for fairness if there’s a big increase in the use of technology.

Research by the Organisation for Economic Co-operation and Development (OECD), which runs the Programme for International Student Assessment (Pisa), has found that paper and computer-based testing can lead to different student outcomes.

Dale Bassett, head of curriculum strategy at the AQA exam board, says: “In high stakes qualifications like GCSEs…we would not move to a system where we allowed students to use technology on an opt-in basis until we could be confident that level of fairness is enshrined.”

“If that is having a material impact on how students actually perform in the exam, it’s really hard for us to compensate for that after the event.”

Richard Garrett, Ofqual’s director of strategic relationships, says he can see some benefits from a greater take-up of technology, particularly in the logistics of delivering and collecting scripts. But he too sounds a note of caution.

“There are at least two issues around fairness. There’s the fairness about making sure [technology] doesn’t differentially impact or advantage students – particularly those who might have had less exposure to [IT] systems.”

The second issue relates to “system-level capacity” – access to technology, network speed and so on will vary between schools.

“It’s very difficult to move faster than the speed of the slowest,” he says.

But Downes still believes that by not giving pupils greater choice about whether they want to use technology rather than pen and paper, the exam system is stuck in the past.

“When else in our lives will you ever be told that you have to go and sit in a room and write, as quickly as you possibly can, in two hours, and make sure it’s coherent, make sure your handwriting is really neat – and make sure that you get everything you know – everything that you’ve learned over the past two years onto that piece of paper…? There’s no other time.”